July 11, 2017
The Evergreen Cottage in Dorman Bay is a much-loved vacation rental today, but few guests know that owner Maureen Armstrong has a family history on Bowen Island spanning four generations, many properties, and one dream — to own a place that would host visitors to the fair isle.

Her story begins with the birth of her great-grandfather, Jacob Dorman, in Istanbul (then Constantinople) in 1858. Son of an Engineer for the British government, Jacob joined the British army in India, then came to Canada via England in 1885. With his wife Sarah, they had ten children, and of them, Maureen’s grandmother was the third, born in Yale, BC. Ellen Dorman was reported to be the first white person born there.

“My great-grandfather, Jacob Dorman, settled to Bowen Island in 1890. He was a steam engineer by trade and bought a merry-go-round with a calliope that played three tunes, and operated it at the Snug Cove picnic grounds. During the steamship era, Bowen had as many as 5000 people on a summer weekend, coming over on the Lady Alexandra and the Lady Cynthia from Vancouver for the dances and company picnics, and some staying over in the Hotel and the many resort cottages.”


In 1890 Jacob pre-empted 160 acres of land on Bowen Island, obtained title but then sold it, and obtained land in Snug Cove. He relinquished the land, and then moved back to England in 1895. The Dormans then returned to Vancouver five years later and settled on a land parcel in Dorman Bay as a family in 1905. Jacob’s dream was to build a small hotel on his waterfront property in the bay that now bears his name. Many of Jacob and Sarah’s ancestors are still living in the Dorman Bay area of Bowen Island.

Maureen’s grandmother picked one of the many parcels of land that her father Jacob bought, for her summer cottage, where she could be near the church and the village of Snug Cove. Maureen has fond memories of staying at her grandmother’s cottage in the summer with her parents, Gordon and Ruth Armstrong, enjoying visiting the beach, boating, horseback riding, hiking the trails, and fishing off the dock. Although the property was sold after Ellen’s death, the family’s enjoyment of the island prompted Maureen’s parents to buy a property in Dorman Bay to build their own family cottage, one that was also close to Snug Cove, with beautiful views of Howe Sound in front and five acres of private forest and trails behind.

“My own children have been coming here all their lives and now my grandchildren enjoy coming to Bowen, now making us five generations of Dormans loving it here,” says Maureen.

“When I retired from our family business in Vancouver, I moved to Bowen and bought the property now called Evergreen Hall Guest House in Deep Bay, also known as Mannion Bay.” Maureen relates that it was built by the Union Steamship Company in the early nineteen forties, as a recreation hall for the guests staying across the road at the Evergreen Park Resort, (also known as the Mannion Bay Resort), which burned down in 1960. The Evergreen Hall, located just across the road from the resort, was bought by a Vancouver entrepreneur who wanted to turn the property into a retreat for city business people. He soon abandoned the idea and the property was bought and restored into a large family home before Maureen purchased it.


“I have been operating the Evergreen Hall Guest House since 2007 and have enjoyed living here as a full time resident of Bowen Island,” says Maureen. Although her great-grandfather never realized his dream of building a hotel in Dorman Bay, Maureen’s loyal guests can attest that her Evergreen Cottage and Evergreen Hall Guest House are as good a realization of that dream, allowing many to enjoy the island and community that Maureen’s family has loved and helped build over the generations.

A big draw for visitors and residents of Bowen Island is the abundant nature. Everywhere you look is covered in beautiful greenery. Our guests love to escape the concrete and noise of the city for the tranquility of the forest. But not everyone is prepared for all that the natural environment brings with it, i.e. it's fauna inhabitants. Here we introduce you to some of the forest residents, a few of whom you may encounter both outside and inside in different seasons, but most of which are happy to stay out of the way of humans. Photo by Greg Schecter Big critters City dwellers may be familiar with the scent of a skunk in the neighbourhood. They usually move on quickly and don't want to interact with humans. Though many folks dislike the misunderstood skunk, they are great at controlling rodent and some insect populations. They are mainly active in the early morning and evening, though can sometimes be seen during the day as well. Look ahead where you're wa 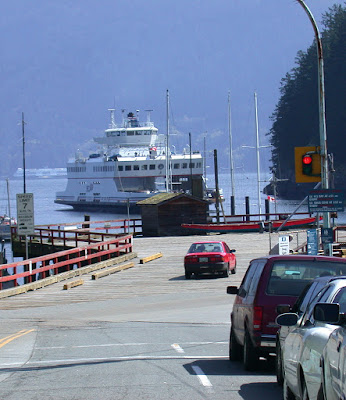 Getting Around Bowen Island

We are often asked "Do we need to bring our car to Bowen?" and the short answer is "It depends." If you are fit, used to taking transit, walking a lot, are open to hitchhiking, and/or are okay not seeing every corner of the island, then you'll do fine not bringing a car. See below for more on non-car methods of travelling and what to expect. However, you will want to bring a car if you plan to bring a lot of stuff, want to explore and get from A to B quickly, and plan to take home lots of treasures. Driving times are short on-island, but walking times are much longer due to hilly and winding roads. Read on for more about all the ways to get around Bowen and what to expect. Bringing Your Car If you decide to bring your car, here are some notes on car access to each of the Bowen Island Accommodations properties. You'll be glad to know we have a gas station here which includes diesel, though weekend and holiday hours may be limited. However,